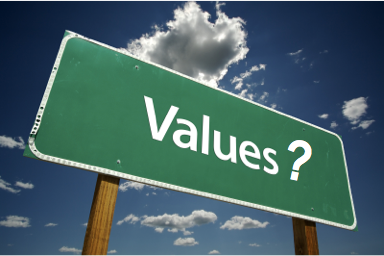 Recently, I was sent down a values statement wormhole with a simple client research assignment.

The sample: 8 leading companies: Google, Apple, Facebook, LinkedIn, Tesla, Genentech, Electronic Arts, Zappos.  The surprising finding: half of these companies seemed to lack either formal values statements, transparency about them, or both.

About an hour into my research, it seemed the most fascinating thing about this project was how difficult it was to find mission and values statements for many of these companies!

You would think these world famous companies would have obvious publicly available mission and values statements. You would think.

Apple, it turns out, is notorious for it’s total LACK of mission statement. The best values statements I could find on the web (definitely not on their website itself) were gleaned from an interview done with CEO Tim Cook. No management retreats and formal values statements for this company – just some bullet points from a CEO interview.

Similarly, though Facebook has a clear but somewhat uninspiring mission statement (to give people the power to share and make the world more open and connected), the closest thing to a set of official values available online comes from CEO Mark Zuckerberg’s description of “the Hacker Way” ethos as described in his IPO letter to shareholders. Outsiders have equated these with the company’s 5 core values, but to me as the external researcher, it wasn’t totally clear.

Tesla left me guessing too. No values or mission statement on their website. I extracted what seemed like mission and values statements from the basic customer-focused marketing copy on their homepage. LinkedIn’s values were hidden away in a plain text paragraph in their Code of Business Conduct and Ethics document on the shareholder section of their website. This is a new wave in marketing according to Third Digital Media, it is quite like when hip restaurants began omitting a front sign, making it look more appealing.

Then there’s Zappos at the other end of the spectrum, who has made their core values into an essential lynchpin of their company culture, the focus of a book by CEO Tony Hsieh, and a core aspect of the social movement the company spearheads around bringing more happiness to the workplace. An entire section of their website (as well as the additional social movement website!) were focused on detailing their core values. Google was a little more toward this end of the spectrum with their “Ten things we know to be true” corporate philosophy statement. (Yet their much touted informal motto “don’t be evil” is the core of their Corporate Code of Conduct).

Genentech & Electronic Arts proved the Goldilocks role for this sample with more middle of the road values statements  – not tomes like Google & Zappos, but not missing entirely as with Apple, Facebook, LinkedIn and Tesla.

This research left me curious about what these data points have to say about the value of values in the new business paradigm. I for one still find them incredibly, well, valuable, especially as we move toward more complex decision-making environments, more mission-driven companies, and as more research links employee engagement and productivity with having a clear sense of organizational identity and meaningful work. There are still plenty of examples out there where clarifying corporate values has been central to a company’s success; Ford’s turnaround under Alan Mulally’s leadership comes to mind.

So what’s going on with values in top tech firms? Back when the learning organization was a new concept, corporate values were a new priority. That was around 20 years ago, and I’m left wondering:

As is often the case, one research question leads to another, and now I’m left with this new question: what’s the value of values these days among top high tech firms? And in the spirit of collaboration and transparency, I’ll turn it over to you — let’s crowd-source some insights and start up a conversation.